Every year there are trends that come and go, no matter the industry. The wonderful world of auto is no exception. This business has its fair share of trends that come and go over the years – sometimes multiple times in the same year! We’re about halfway through 2016 and the auto industry is as technologically advanced as ever. But, in 2015, what trends did the auto experts predict would come to fruition in 2016? How accurate were those predictions? Well, the Discount Auto Glass team is here to check up on some of those trends and see how accurate they are at the halfway point of 2016.

We’ve taken a few of those predictions and put them to the test:

Autonomous features: In December 2015, Yahoo.com predicted that cars in 2016 would have more autonomous features. When we think of autonomous cars, a lot of us think of a self-driving car. While those haven’t quite hit the main auto market, a lot of cars in 2016 do have autonomous features on them. To name a few – parallel parking assistance, automatic braking when the car senses an abrupt stop coming up and lane following/drifting features. With technology advancing at the pace that it is, we’re pretty sure it won’t be too long before those self-driving cars are no longer a fantasy, but a reality for everyone!

Ridesharing will take over: In the same Yahoo.com study from December 2015, it was predicted that ridesharing would continue its dominance over the taxi industry in 2016. This prediction has proven to be true. Ridesharing apps such as Uber and Lyft have continued to get higher customer approval ratings than taxis. As of Feb. 12, 2016, there were 30,000 Uber drivers in New York City.  As the popularity of ridesharing continues to grow, the demand for drivers will continue to surge. 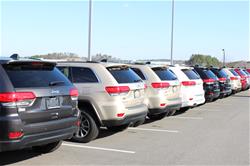 Car buying will reach an all time high: According to Forbes.com, the National Automobile Dealers Association expected that auto sales in the United States will reach its highest point in 2016, and then will decline in 2017. Unfortunately, we’re already seeing this decline, according to Car and Driver. As of March 2016, the auto industry had its first dip since April 2015. “At this pace, the industry is headed for 16.46 million total sales for 2016, down by 1.01 million in 2015,” the Car and Driver article states.

Though keeping up with auto trends is fun, safety and security inside your vehicle should be your top priority. Having auto glass that is free of chips and cracks is an important factor in keeping your sight free of obstruction. We’d love to be the crew that you call to help fix any auto or flat glass that is less than stellar. Our Discount Auto Glass technicians are professionals and can come to you if you don’t have time to step away from the office. Call us or use our form to request a quote today. Give us a call for any and all of your auto glass needs! (501) 377-9575.